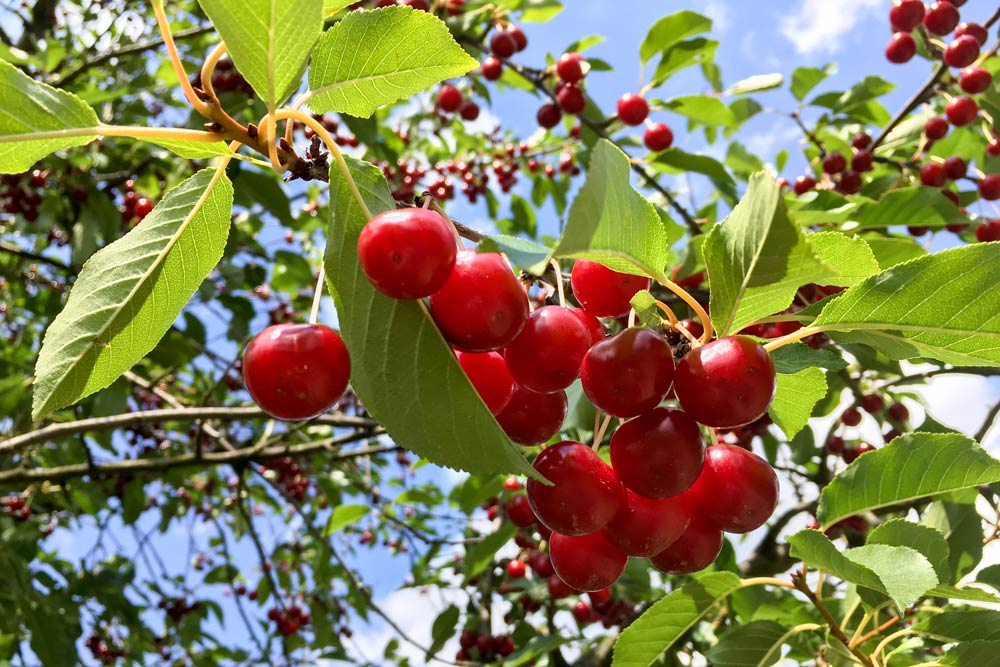 I love sour cherries more than cherries. I think they are more versatile in use and its sour flavour is just awesome. That’s why me and my friend go every year to sour cherry orchard in Bezenye (small village in northern part of Hungary). It is so easy to hand-pick these lovely berries that it’s almost impossible to stop doing it. Which means that we pick so many of them, that I have to process them three days in a row. My dreams are dedicated to pitting sour cherries, but it’s worth it.

There are many ways how to process sour cherries. In this article you can find six of them. If you’d like to know how to make sour cherry syrup, jam, how to can them with or without rum and how to freeze or dry them, continue reading. You can also use them to prepare baby food, sponge cake or Black Forest gâteau (originally Schwarzwälder Kirschtorte) or Black Forest roll cake.

Enjoy canning, freezing, drying or whatever you are going to do with sour cherries.

Put the washed and pitted sour cherries in a larger pot and sprinkle it with 2 cups of sugar. Mix well and allow to rest for at least an hour until it releases its juices.

Strain the juice and make a jam from cherries (see below recipe). Bring the juice to boil together with 300 grams of sugar. Adjust the amount of sugar to the amount of juice. Use 500 g sugar for 1 liter of juice.

Collect the foam that forms on the surface during cooking. If the syrup is too dense, you can dilute it with some water. You will find this by pouring a little syrup into the cooled bowl. Put the bowl in the refrigerator and after a while you will find out the real consistency of the syrup.

Allow the syrup to boil (for at least 5 minutes) and pour the hot syrup to a clean, sterilized bottle.

Put the bottle in a blanket or towel and let it cool down.

When the jam starts to boil, pick the orange peel and blend part of the sour cherries with hand blender.

Cook until the jam has the desired consistency. Pour a tablespoon of jam on a chilled plate, place it in the refrigerator and after a while you will realize the real consistency. If the jam has desired thickness, you’re done. If not, cook the jam bit longer.

Turn off the heat, prepare clean sterilized glass jars and fill them with hot jam. Twist the lids and sterilize in water (water should be 2 cm above the top of the jars). Give it a 10 minutes full boil. After 10 minutes, take out the jars and put them in a blanket or towel until the next day.

Canning sour cherries with or without rum

I did not mention the quantities intentionally, because it depends on how many sour cherries you want to can or how many will fit into canning jars.

I don’t pit them. This is mainly due to my laziness, but I don’t consider it even a necessarily. If you have the time and will, pit them. However, bear in mind that those sour cherries canned with rum will be completely soaked in rum.

Place a handful of washed sour cherries in clean jars, sprinkled it with 1 tbsp of sugar and repeat the procedure until you fill the jar. If you want to can sour cherries in the rum, pour the rum almost to the top of the jar.

If you want only ordinary sour cherries, pour a little bit of hot water over them (in the jar). Twist the lids and sterilize the jars in the water (water should be 2 cm above the top of the jars). Bring to a full boil and boil them for 20 minutes. Remove the jars from the boiling water and let them cool in a blanket or towel.

You can use these canned sour cherries in cakes, truffles, desserts or eat it just like that. 🙂

Wash the cherries, pit them and put them in a fruit dryer. If you can set the drying temperature, dry them at 40–50° C. You can get about 100 g of dried sour cherries from 350 g of fresh pitted sour cherries. Store it in a sealed container in a cool place.

Frozen sour cherries are the most versatile in use. That’s why I always freeze the most of them, although the process is a bit tedious.

Wash and pit them first. I recommend to freeze them separately, and then put them in a freezing bag. This prevents it from squeezing and sticking together. I use ice or praline molds for separate freezing. Each sour cherry is placed in it’s own space.

Once they are frozen, I put them into the freezing bags. You can store them in the freezer until the next season. I use to make a baby food in autumn from these frozen sour cherries.